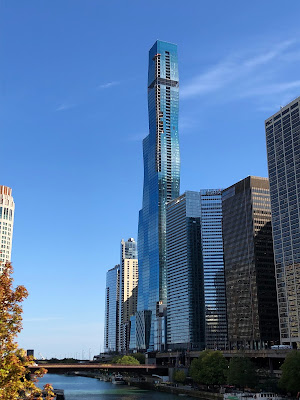 Vista Tower is coming along. I was strolling south on Michigan Avenue last week, and paused just north of the bridge to admire its progress. The 101-story building is the third tallest in Chicago, after the Willis Tower (sigh ... no, seriously, people have given up the Sears thing, right? Because it's been over a decade. Get with the program, folks) and Trump Tower (still going by its original name, alas).
Designed by Studio Gang—the same folks behind the way-cool Aqua building—Vista Tower has a very neat feature. If you look at the photo to the right, you'll notice a dark band near the top. That is the "blow-through" floor. Without it, the Chicago winds would rock the building so much people on the highest floor would get seasick. Many buildings try to counterbalance this effect with stabilizing weights, tanks of water and such. The blow-through floor allows wind to cut through the building, rather than push against it. The floor is a little taller than the regular floor, and doesn't seem as if it'll have any use for tenants. I get the impression it won't be a patio or pool or anything, but just an empty space. Which is a shame. I suppose if they clutter it with plants and deck chairs and bocce ball courts then the wind won't blow through right.
Maybe there will be a sly wink value to it. I can't help wondering if wisenheimers who get in trouble will say they live on the 83rd floor of Vista Tower, the way Elwood Blues tells the Department of Motor Vehicles that he lives at 1060 W. Addison (sigh, the address of Wrigley Field).
Probably not. 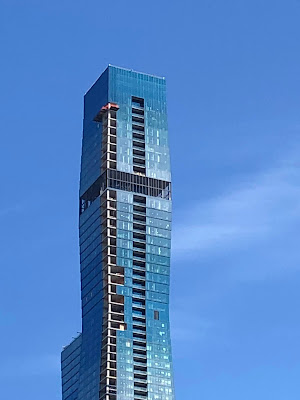 Yes, today is a light entry. If you want, I'll give you your money back. The politics of late have been cascading over me, water off a duck's ass. Numb, maybe. Tired, disgusted, afraid; I'm not Sigmund Freud, I can't easily access the bottom of it, and don't really want to.
Maybe I'm just waiting. The bus doesn't come any faster if you tap your foot. At some point sweating the details of this calamity is stupid. The woods are burning; do we really need to say "Oh look, that tree is on fire and that tree is on fire and this tree, and the one over there"? A big fucking forest fire. We all get it.  Now let's get on with this.
There came a point in the eternal O.J. Simpson trial where I just shut off, covering my ears and screeching, "Just tell me how it ends!" I don't think I'm going to watch either dueling town hall tonight, with Joe Biden on ABC, and Donald Trump on NBC. What would be the point? Anyone who didn't figure out a long time ago that Trump is a despicable con man, liar, criminal and traitor who will ruin the country, further, given the chance, is not going to grasp that now. And Biden, well, he could spend tonight's TV time teeing up newborn puppies and and perfecting his golf swing by driving them into the ocean and I'd still vote for him.
Posted by Neil Steinberg at 12:00 AM