Attack on the Champs-Elysees 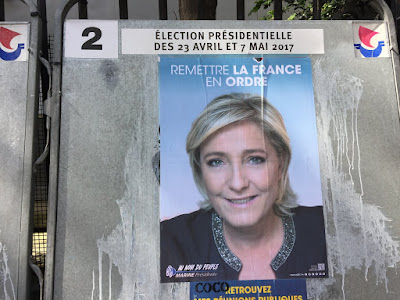 People eat late in Paris. So when news of Thursday night's terror attack on the Champs-Elysees started pinging across our cell phones, shortly after 9 p.m. local time, we were sitting around the dinner table at the apartment of friends in Boulogne Billancourt, a western suburb, discussing the upcoming presidential election--the first round of voting begins Sunday. As with America last November, theirs too is devolving into a nightmarish farce, with the likely winner suddenly seeming to be either the communist Jean-Luc Melenchon, who wants to pull out of the European Union and nationalize the banks, or the National Front xenophobe Marine Le Pen. It hardly needs to be said that the murder of a police officer and the wounding of two others, a shocking event in France, on the wide shopping boulevard synonymous with prosperity, will boost Le Pen's all-too-real chances. A reminder of the tacit collaboration between haters around the world. Groups like ISIS commit atrocities in the name of Islam trying to drive a wedge between Muslims and the moderating influence of the tolerant West, and fearful haters like Le Pen eagerly believe them.  Both are allies, and both want the exact same thing.
Posted by Neil Steinberg at 12:00 AM