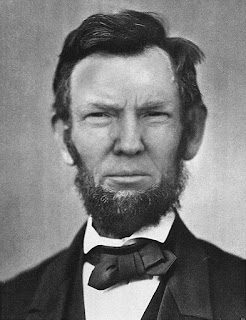 A friend posted to Facebook his list of "25 names for the current occupant of the White House." Most can't be quoted in a family newspaper. But some can: "President Yam" and "Commander in Thief" and "The Tang-Toned Baboon," — my friend's an artist, so many refer to Trump's alarming sprayed-on tangerine skin tone.
And while I admired them — "Cheetolini" is my favorite, as Trump has perfected that Il Duce lower lip pout of contemptuous authority — they also stirred up something that's been bothering me for three months, and I might as well try to figure it out.
In mid-January, Trump's inauguration was looming. Being of a historical bent, I turned to the past for perspective. There was, of course, Nixon's 1969 inauguration. Protestors chanted "Four more years of death!" A press corps that had been smirking at Nixon, with justification, for 20 years, suddenly were aghast to find this grubby former Red baiter assuming power. Syndicated columnist Russell Baker described the festivities this way: 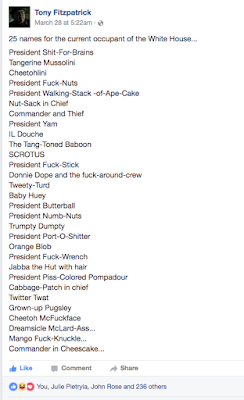 "Physically, it was a day out of Edgar Allan Poe, dun and drear, with a chilling northeast wind that cut to the marrow and a gray ugly overcast that turned the city the color of wet cement. No graves yawned and no lions roared in the streets in the Shakespearean manner, but the gloom of the elements seemed to have infected most of the proceedings."

The other inauguration that came to mind was Abraham Lincoln's, for the simple reason that half the country hated him, too, vehemently, passionately. As the South bolted for the exits, their outrage — caused, never forget, because Lincoln intended to take away their slaves — overflowed, and they damned him with all they had: