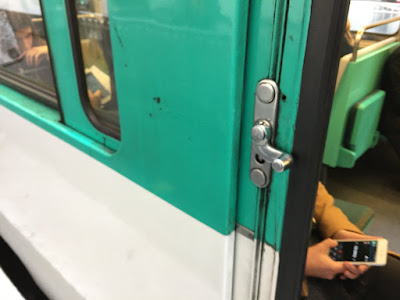 I've ridden the Paris Metro nine times in the past two days, racing from museum to restaurant to library, rumbling from Odeon to Pyramides to Opera, and so couldn't help noticing ways their system is different than Chicago's.
No announcements. They commute on utter quiet on their trains' rubber wheels.
Some parts took figuring out. The first train I went to get on pulled into Cardinal Lemoine station. The other doors slid open, but the door directly in front of me stayed resolutely closed. I sprinted to  the next door-- Paris subway trains have three or four entrances to the two on Chicago "L" cars--and hopped on the train. On Paris trains, riders have to open the doors themselves to get on or off, either by lifting a chrome lever or, on newer trains, pushing a green button. Parisians seem to handle the responsibility well.
The benefits are obvious. Less wear and tear on the door mechanisms, for one, since they only open when a person wants to get on or off, not every time the train pulls into the station. It also allows, I noticed, gentlemen a chance to be polite, as those standing by the doors will open them for the benefit of others, even though they themselves are not leaving the train.
Other differences are less readily explained. I have seen more people rolling cigarettes in two days riding the Paris Metro than I have in the past 20 years riding the "L," including a man Wednesday who removed the tiny butt of a smoked cigarette from between his lips and delicately inserted it into the makings of his next smoke. Why all this impromptu manufacture? It couldn't be poverty--France does have 25 percent unemployment, so maybe that's it. Though there are a lot of poor people in Chicago too and I don't see them rolling cigarettes on the train. Maybe that's it--I'm riding the train more  here. Or maybe it's that so many more people still smoke here.or -- a guess from left field-- maybe a country with national health care taxes the bejesus out of cigarettes, to pay for the enormous medical burden they place on society, but loose tobacco for some reason is taxed less. Anybody know?
While I'm tossed out questions that I would figure out myself were I not on vacation, what's with the scarves? French men like to wear them loosely around their necks, dark blues and purples and greens, fine wool scarves that are part warmth, part decoration. You might see such a scarf on a flamboyant young man or two in Chicago, but here they're everywhere. I know it's dome kind of Gallic badge of masculinity. But why?