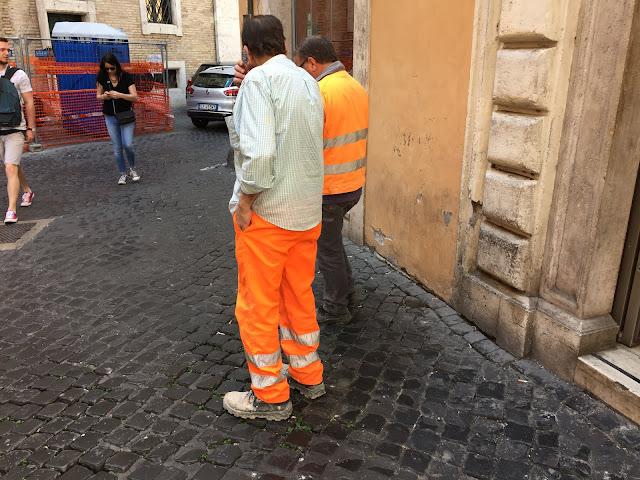 My older son is hanging out in Rome, I can report on good authority. I'm reprinting some columns from when I was there in 1999, so that I can keep my focus on il pranzo which means, well, you'll have to read it to find out. Of course the lira is gone now, replaced by the euro.


ROME—At first it seemed to be just another funky fashion: a man wearing orange pants. I mean bright orange, Popsicle orange, signal orange, the color usually associated with life jackets and distress flares.
Italians dress pretty much like Americans. A little sharper, maybe, a little snugger. But I hadn't seen anything too strange, certainly nothing as wild as all those 14-year-old American tourist girls with geometric bands hennaed around their necks. (Gosh, I hope it's henna, and not a tattoo. Imagine selling that to Mom.)
Still, my first reaction to the orange pants had been bland acceptance. Why not? Europe in 1999.
But the orange-panted man was unlike most every other man in Italy. He wasn't strolling down the street, gesturing expansively with one hand while pressing a cell phone the size of a pack of playing cards against his ear with the other. He was standing in a trench, working on a sewer pipe. I stopped, and saw that the guy with the orange pants was accompanied by other men, also wearing orange pants.
Then it hit me. Not fashion, but practicality. People drive like lunatics here. A roiling commotion of motor scooters, tiny cars, lumbering Mercedes, all hurtling pell-mell around each other. A man standing in the street for any appreciable time is in mortal peril. Visibility is crucial for survival. Besides, it gets hot here, and while a construction worker might take off his safety vest, he certainly wasn't going to take off his pants, not in the street, not in Italy.
I know one goes to foreign countries to see the splendors — the churches and castles and art museums. And I saw those and enjoyed them, at least until numbness set in. But I observed with keener interest, I admit, the small-yet-smart differences that Italian culture has from our own, the slight improvements.
Some are slight indeed: The toilet in our hotel here had a small indenture in the cover, exactly four fingers wide, located just where you would reach down to flip the seat up. Not a revolution, but a nice touch.
Or take money (and boy, do they ever, with both hands). Of course their money is beautiful, colorful, well-etched, far superior to the dull green clumps of ill-wrought lettuce we wave around. They also make a greater attempt to differentiate between denominations. A 1,000 lire bill is tiny; it looks like play money, and basically it is, considering what it will buy. The 5,000 lire bill is larger, the 10,000 lire larger, and 100,000 larger still. I assume a 1 million lire bill (about $550) would be enormous, but I never got my hands on one, afraid I would blow it all in one spot, say on a shirt, easy to do in a nation where you are charged just for sitting down in a restaurant.
The chair fee points to the flip side. For every good Italian idea, there was a matching bad idea or bit of absurdity, at least to American eyes.
Consider mail service. Since smallness and slowness (except when commuting) are cherished values here, the Italian mails are even worse than the notoriously bad U.S. Postal Service. This was demonstrated to me in dramatic fashion one morning in the main post office in Rome.
Hoping to wow my friends with letter postmarked in a foreign land (my circle doesn't get out much) I took a handful of letters to the post office, and purchased stamps from the slumped, indifferent clerk.
Italian mailboxes are red, suitcase-sized metal boxes bolted to the wall at eye level, about half the volume of squat, U.S., ground-standing counterparts.
I pushed one letter through the slot and, pushing in the next, felt my previous letter. Peering through the slot, I noticed the mail was jammed to the brim, my two letters sitting on top at about 10 a.m., across from the front desk inside the main post office. Imagine what boxes must be like in the provinces -- packed like garbage cans at Taste of Chicago.
Worried about theft, I reached in, plucked my two letters back from top, and went to find another, less densely populated box.
The postal clerk, by the way, had a cigarette dangling from his fingers. American smokers might consider a trip overseas just for the nostalgic thrill of seeing people strolling in and out of stores and businesses while smoking, unashamed.
But the best idea in Italy is one that might take a bit of explaining to an American audience. It's called il pranzo, or in the closest English translation, "lunch." Not that the average American meal, bolted back with joyless haste, has much resemblance to a leisurely Italian midday repast. How important is lunch here? They close the stores. They close the banks. The streets empty.
The next two hours or so are spent spooling pasta, cutting into veal, pouring ceramic pitchers of red wine, spooning gelato (they don't need to watch their diets here because all those cigarettes are going to kill them anyway).
The Italians sit and sit and sit, talk and talk and talk, eat and eat and eat. As will come to no surprise to regular readers of this column, it is a concept that I immediately and wholeheartedly embraced.