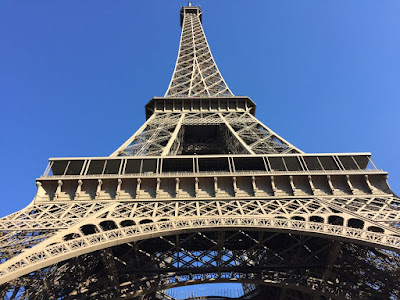 —Tech problems persist in Paris: I can't make the italics I like for this little introductory text, perhaps due to some heretofore unimagined EU restriction on the importation of exotic fonts. Anyway, while doing so raises the specter of lowered EGD standards, I thought, since I'm on vacation and my equipment is failing me, I would offer up something I wrote previously but never posted (I don't know which is scarier, the realization that I write even more stuff than gets thrown up, pun intended, here every goddamn day, or that I actually reject my own stuff as inadequate, sometimes. Though that IS the mark of a professional, which I try to be, today notwithstanding.
Enough. I wrote this at the end of December but never posted it, probably because it struck me as boastful and arch and preening. But still, better than nothing. I hope. For the record the boy did call faithfully, every week, without fail.—

Lunch was tuna fish salad -- with cranberries, the good stuff from Sunset Foods. Expensive but, heck, it's the holidays. I started the charge Friday, loading up two slices of wheat toast, with lettuce and tomato and a big mound of tuna.
My wife followed my lead, piling sliced tomatoes with tuna, then noticed the banana bread she had baked earlier that morning, set out, cooling. She reconsidered -- maybe a slice of that instead of the tuna.
"You could put the tuna fish on the banana bread," Ross deadpanned. "It's a 'Perfect Day for Bananafish.'"
She looked up with an expression of inquiry. An odd remark that warranted explaining.
"A short story..." Kent began.
"By J.D. Salinger..." I added.
Welcome to the Steinberg family. Edie will say we could have some noodles with dinner, and I'll say, glancing at Ross, "Noodles. It's a long time since I've eaten noodles" and he'll smile—a line from "Uncle Vanya," thick peasant practicality intruding on all the high-minded Russian banter at the end of the play. Chekhov goes on from there, but I always thought it should have been the final line.
I don't get to do that with other people, but one glory of children is that you can raise them into people you want to hang around, if you're lucky.
Forty-eight hours later, Ross was on his way to France, where he starts classes in international economics and French at the Pantheon-Sorbonne on Wednesday. Kent was back at Northwestern, with no prospect of another lunch, all four of us around the kitchen table until May.
I almost said it's hard to have the boys go away, but that's not true. It's hard to have your children in a hospital, or in prison. To have them at college, it's neither hard nor easy, but just is, how it's supposed to be, just as winter might be cold, but it's expected. Besides, if winter comes, can spring be far behind?
That's Shelly.
"A Perfect Day for Bananfish," by the way, is not nearly my favorite Salinger story from his Nine Stories. Though if you ignore the shocking development, it is apt, with the daughter talking by long distance to her concerned mother, a connection that takes two and a half hours for the hotel operator to make, and costs a fortune. No more. I downloaded Whatsapp—another punning literary reference, this one on Bugs Bunny. You can talk to anybody anywhere in the world for free—but can't imagine us using it much. I think I'll pause from hanging out in Paris with my new pals to go talk to my DAD.... No, don't see that happening much. But if it does, I have the app.
"The Laughing Man," that would be my favorite Salinger short story from his collection, for how it so perfectly captures a moment in a young boy's life, when he is a member, "with maximum esprit d'corps," of this threadbare New York City after-school club, run by the Chief, a hero in their eyes, and the romance that goes on just outside of the view and understanding of the boy, and the cheezy-yet-perfect radio serial-esque tale told to keep the tribe occupied.
A close second is "For Esme—with Love and Squalor" a tale, like "Bananafish" of an adult man and a little girl, this one about 13, at the next table with her little brother and their governess in a tea shop in wartime Britain.  The same PTSD dolor hangs over the tale, though this one ends happily, or happier than "Bananafish," which isn't saying much.