You can be the center of the world 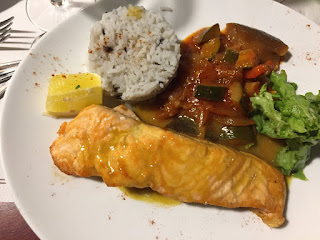 "I'm listening," announced the waitress, walking up to our little round table at a small bistro called "Le Centre du Monde" on Rue Galande not far from Notre Dame Cathedral in Paris Monday night. I asked her if the salmon in citrus sauce is good. She gave me a curious look, as if I had asked something exceedingly obvious.  An almost insulted look that said, "Of course it is."
"It is ... in citrus sauce," she replied, and I took that as a confirmation, of sorts, and ordered it, even though I had already had salmon at lunch.
The fish was more than good, it was excellent, served with rice and ratatouille, and as we ate I asked my son if "I'm listening" is a common French idiom, something waitresses typically say to prompt an order. No, he said, he didn't think so. Maybe it was particular to her.
I considered asking the waitress, a majestic Gallic beauty. But that seemed a Bad Idea.
Perhaps as compensation, as we headed out the door, I asked a passing waiter why the restaurant is called, "The Center of the World." He laughed, a short, derisive laugh, the laugh an unkind person would make seeing a stranger trip and fall and hurried outside to smoke a cigarette. 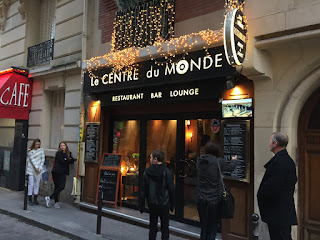 But as we stepped onto the street the owner, an older man--okay, maybe he was my age--followed us out of the restaurant. I asked the question again.
"This used to be a Roman road," he began, gesturing to the narrow cobblestone street in front of the place. "The Romans built them east to west. About 100 meters away is Notre Dame Cathedral, which is the center of Paris. Distances of the various roads to Paris were measured from that spot."
He went on quite a bit, saying, in essence, France is the center of Europe and Paris is the center of France and this is the center of Paris."
"Now of course we know the world is round, so the center is..." He gestured down below. " Now the center of the world can be anywhere. You can be the center of the world."
I understood what he meant, and thanked him. "The dinner was excellent," I said.
He gave me a surprised look, as if to say, "Of course it is."