Divvy Diary: The Running of the Bikes 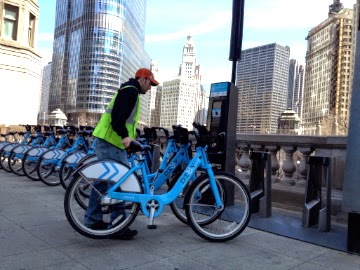 “Wabash and Grand has only one dock open,” says Rich Ewalt, checking his phone.
He sits behind the wheel, parked on Orleans, west of the Merchandise Mart, where he has just picked up seven identical bikes, running as he rolls each heavy three-speed up a metal ramp and into the back of a large Mercedes van, the van painted the same shade of robin’s egg blue as the bikes.
It’s 10:37 a.m. Ewalt is working at one of the newest jobs in Chicago: He is a Divvy Bike rebalancer.
The city’s 16,414 Divvy members, who each pay $75 a year for the right to ride any of the program’s 3,000 shared bikes whenever they like it, for a half hour at a time, can’t take a bike from a station if there are no bikes there to be taken. Nor can those riding a Divvy drop it off at a station if every dock is filled.
Hence the need for “rebalancing” — shuttling bikes to and fro, from full to empty Divvy stations, all day long.
“These things gotta move,” Ewalt says, pulling into traffic. “They’re filling up fast.”
Though not as fast now, at midmorning, as earlier, during rush hour, when a station can be stripped of bikes or overwhelmed with them in matter of minutes. The customers howl when that happens.
“If you’re going to work, you don’t want a full station; that’s not helping. That’s going to take time out your day,” Ewalt says. “We gotta fly in the morning and try to get every station.”
Without rebalancing, docks at places like Ogilvie Station would always be empty in the mornings and full in the afternoons.
"Some stations self-balance, and others require our involvement," Divvy GM Elliot Greenberger says. "We use a combination of real-time data and intuition to keep the system balanced. But we're also working with some data scientists to develop more predictive modeling that can help us better anticipate full or empty stations."
Each Divvy bike contains a chip that talks to the docks, which let the office in West Town know how many bikes are at any given station at any given time. Having worked for Divvy since Day 1 — previously he was a security guard at a sporting goods store — Ewalt usually knows what to do.
"Weekdays, you definitely have a feel that this station is going to be filled by this time, this station is going to be empty at this time," he says. "You get the same back and forth. I can pretty much handle rebalancing without them calling me. They pretty much let me do my thing. But if a station's been at zero for a bit they'll definitely let us know."
There are five rebalancing vans out Friday: Divvy has seven; two are idle for repairs. While Ewalt carries rags and solvent to go after graffiti - a growing problem - repairs are left to repair techs. Divvy also has roving bicyclists checking and filling tires.
At Wabash and Grand, another four bikes go into the van, which holds about 24. Ewalt also runs past every bike and gives its seat a tug to make sure the bike is locked in. Though customers are on the hook for the $1,200 bike from the moment it is pulled out of its dock, a surprising number of customers returning their bikes, Ewalt says, roll their bikes into the rack, but not with sufficient force to have the system lock. Thus, not only could the returned bike be taken by anybody passing by, but the customer is still paying and time is rolling.
That said, no customer has yet been slapped with a $1,200 fee, nor has Divvy lost many bikes — fewer than 30. When bikes go missing, customers often bird-dog them.
"Divvy people are out there," Ewalt says. "If they see a Divvy bike in an area it shouldn't be, with no station near it, they'll call in.
"Lots of times we'll find a homeless person using it as their bike. We'll ask politely, saying, 'We know there are no stations around here, do you mind if we ask your name, because you're riding one of our bikes'? Ten out of 10 times they'll just hand the bikes over. We haven't had a problem.''
The amazing thing about Ewalt is that he runs, flying out of the van, racing to the racks, grabbing bikes, sometimes two at a time. He was hired after a Divvy manager noticed him hustling boxes at the sporting goods store. Showing off for the media? No way.
"It's a great workout for me," says Ewalt, 32, who lives in Jefferson Park with his wife and young daughter. He does mixed martial arts. "I love working out. I train at night."
He also loves the company for which he works.
"I can't wait to see what it's going to bring."