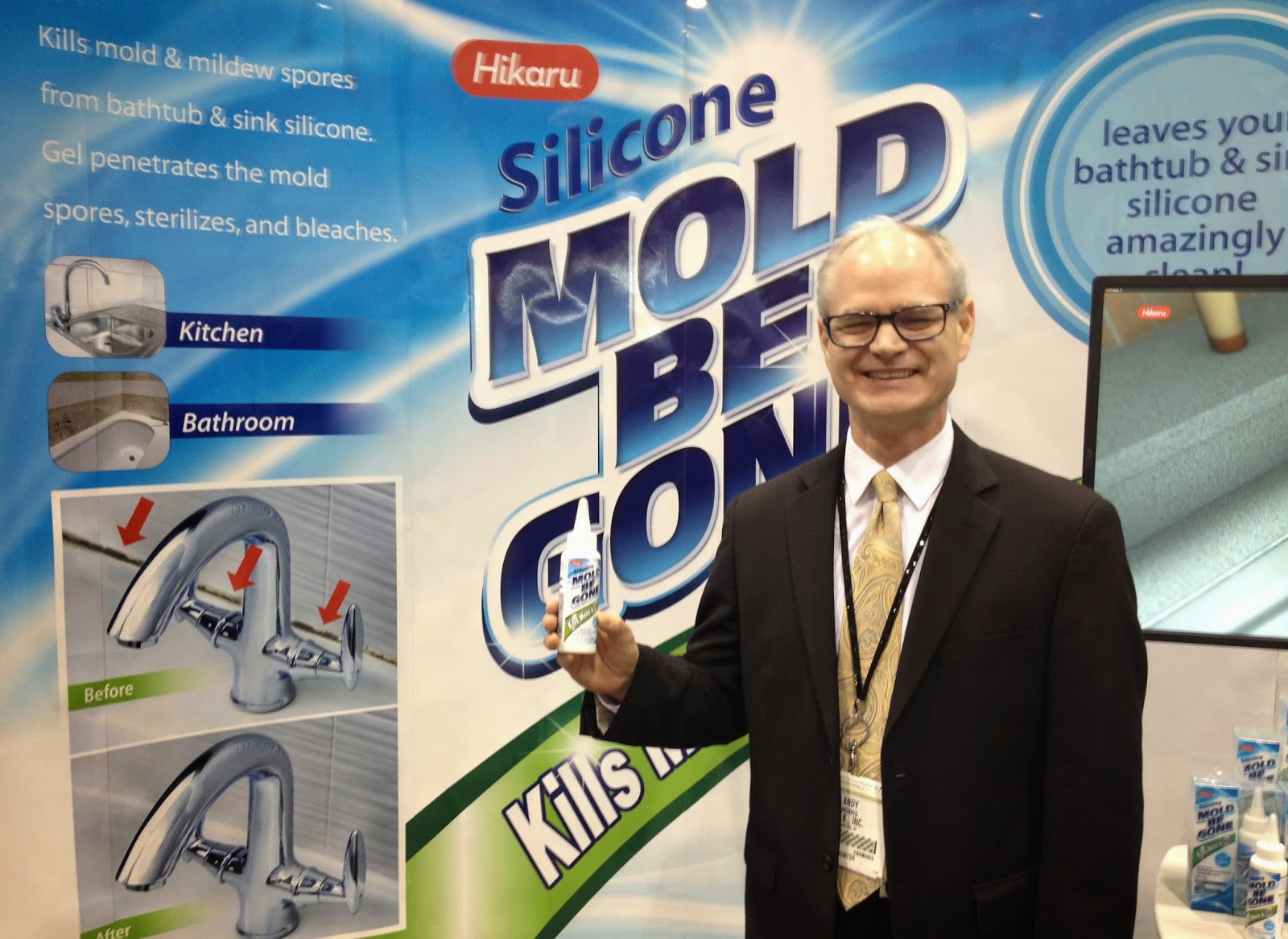 I could write a week's worth of columns at the Housewares show—there are just so many hopeful, quirky people, so many good—and bad—ideas. It's just overwhelming. Only after I wrote this did I realize I forgot to mention Bambooee, the reusable paper towel made from bamboo. You can wash the sheets up to 100 times, but the question for me was whether anyone would pay $15.99 for a roll of 20 paper towels that you toss in the laundry. To me, that makes them rags, and why pay for them when there's an endless supply waiting to be cut up in your t-shirt drawer? "Can you put them back on the roll after you wash them?" my wife asked, touching upon the convenience factor in paper towels. The whole point is: you throw them away. So even though I think reusable paper towels is a non-starter, somebody obviously put a lot of money into the idea. 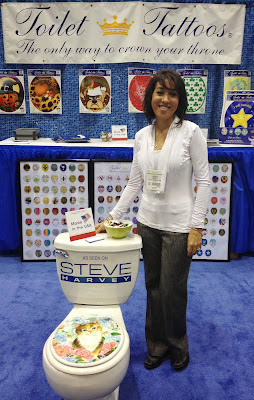 Are you vexed by twist ties? Because you can’t find one when you need one, or the ties you do find are all kinked up, or not the right color?
Milton D. Wheeler has a product for you.
“The Twist-Tie Pod,” a circular unit that lets you cut your own lengths of twist tie from a 65-foot spool, one of the blizzard of products, old and new, featured at the 2014 International Home + Housewares Show, which opened Saturday at McCormick Place and brings together 2,000 exhibitors and 60,000 foot weary attendees, trudging past an endless vista of plastic tubs, wooden spoons, crystal glasses, dog beds, gourmet knives, and—most interesting—new products whose concepts  are either brilliant or ridiculous, depending on your perspective.
Satisfied with your current twist tie arrangement? How about your toilet seat—is it drab? Consider Toilet Tattoos, labels that adhere to the top of a toilet seat, transforming it into a zebra skin print or butterfly swarm or death’s head.
“I wanted a leopard seat,” explained Celeste Massullo, an Ohio woman who started with four designs and now sells 175.
The show is open to the trade only, and indeed, most booths are interesting only to someone who, for example, might want to order a shipping container full of wine racks. But to the casual observer, the novel new products stick out, each with its own story.

“My sister asked me, ‘What do I do about bananas constantly being crushed in my backpack?’” said Paul Stremple, who answered by inventing  the Banana Bunker (“Protection with Appeal”)  a plastic case that fits around a banana, protecting it from the vicissitudes of the lunch bag.
The show sprawls across McCormick Place, featuring manufacturers who come from around the world to do business, to find out what’s new and make contacts and sales. Just walking through the show is an art. To make eye contact is to invite a pitch.
“I got a product that you just don’t need,” said Andy Morris, pushing Mold Be Gone, an anti-mildew spray. He came up with the approach—he said—the day before, trying to get people to break stride. “Everybody here is trying to sell you something, to convince you it’s something you need,” he said. “So I figure, ‘Here’s something you don’t need.’” 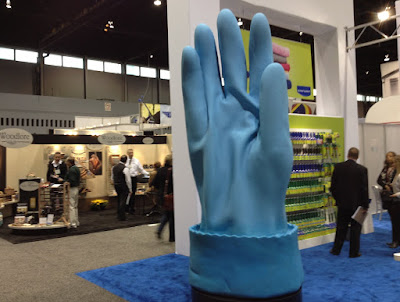 Some products take a moment to understand. The Iron Shoe is neither iron nor worn on the foot, but a high tech surface attached to  irons to protect clothing. The Grillbot crawls over a grill, scrubbing it with three rotating drums of metal bristles.
“Takes a dirty, messy job and now you want to watch it like a race car,” said Ethan Woods, who came up with the product after finding himself using a metal brush attached to a power drill to try to clean his grill.
Not every new product is trivial. Potsafe is a new system of cookware and metal framework designed to keep children from pulling hot pots off stovetops.
Gloves seem big this year, particularly specialized disposable cleaning gloves. Duramitt offers a range of mittens with sponges attached to the palm, or scrubbers, or surfaces designed to hold paint.
"No one wants to get their hands dirty anymore," said Diana Malone, of Kleen Maid, which sells Spic and Span Disposable Dusting Mitts, in packs of five for a dollar. Though gloves "have been around forever," specialized, disposable versions are becoming more popular. "Everyone has become germ-conscious," she said.
Of course, makers of traditional gloves point out the obvious drawbacks of these all-in-one gloves. "If you only have a sponge on your hand, you can't do anything else with it," said Evan Karls, a division manager at Karmin Group, which licenses Arm & Hammer gloves.
Managing garbage can liners must be an issue, because several new products address it. "It comes out like a tissue box," said Jack Licata, president of Bag Ups, "The Original Trash Bag Dispensing System," which sits at the bottom of your trash container, ready to offer a fresh bag. 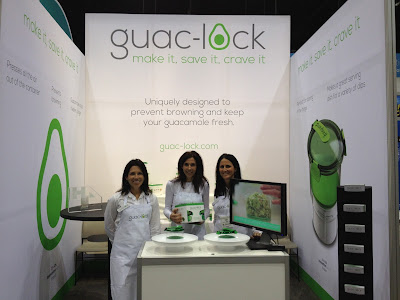 Some products surprise with their elaborate presentation. Guac-Lock is a container designed to keep guacamole from turning brown, but its airy, white-on-green graphic booth looks like a jewelry store, or something Apple would design.
Some new products aim for an almost heartbreakingly small niche, yet seem to be thriving. A few years back the show saw the debut of Dipr, "The Ultimate Cookie Spoon," a hook that slips around the center of a sandwich cookie to facilitate it being dipped.
"Business is good, sales have doubled," inventor Robert Haleluk said. "Now we're on to our second product." That would be the Dunkr, a cup that narrows to a half-cookie shape. "High displacement dunk chamber funnels the milk into a narrow groove at the bottom of the cup," its literature explains, "giving you a perfect dunk, even with very little left." Suggested retail price: $6.99.
The show runs through Tuesday. 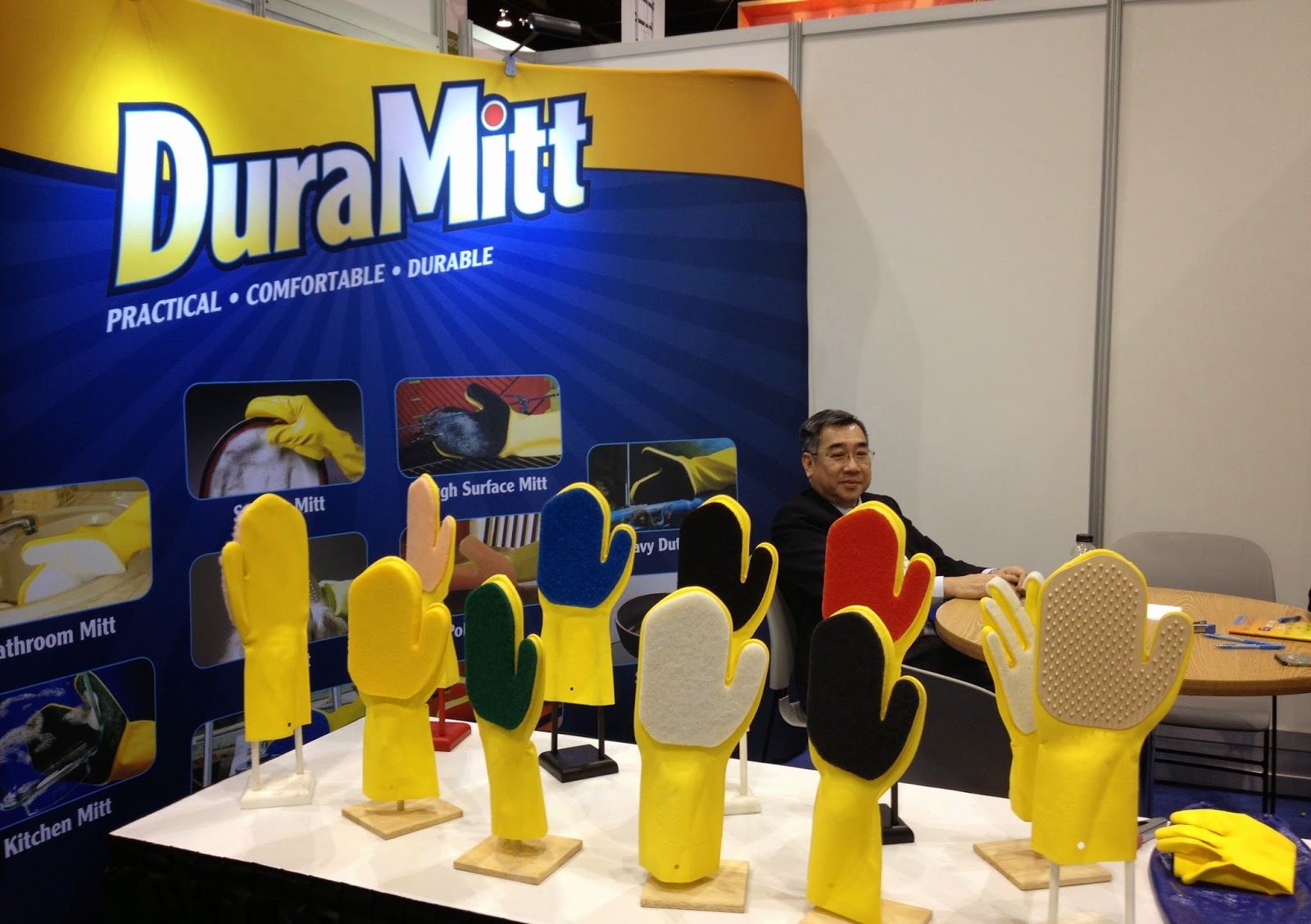