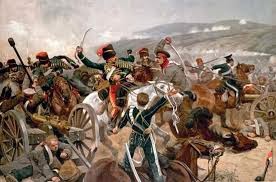 Why is there always this sense of rush when it comes to war? We have not yet extracted ourselves from a dozen bloody, futile years in Afghanistan, yet the immediate cry is that the Americans should have been ready to leap when the Russians invaded Ukraine over the weekend, even though the Ukrainians obviously weren’t ready either, which is understandable, since their political chaos is what emboldened Putin in the first place.
“Every moment that the United States and our allies fail to respond sends the signal to President Putin that he can be even more ambitious and aggressive,” said Sen. John McCain, R-Ariz., without, of course, spelling out what that response should be.
McCain was mild. Reaction in the U.S. was the usual mouse shriek of partisan outrage that pinned the blame for Putin’s trespass firmly on Barack Obama.
“Emboldened by President Obama’s trembling inaction, Vladimir Putin has invaded the Crimea region of Ukraine,” Rep. Tom Cotton, R-Ark., said, demanding that Putin be brought to his knees by a series of small symbolic rebukes, like revoking travel visas and freezing bank accounts, measures his tea party pals would mock were Obama to suggest them.
My reaction to news of a nascent war in Crimea was, I kid you not, “What, again?” thinking of the Crimean War of 1853-56. While that was a very long time ago, there is a dreary sameness to all war, and the two situations are not without parallels. The Russians used the same pretext for invading — to protect nationals they claimed were being manhandled by those in possession of the place, rebellious Ukrainians now, Ottoman Turks back then. The French and English came to the aid of their Turkish pals, and the game was on — three years of fighting, more than 500,000 soldiers dead.
Some consider it the first modern war, with trenches and bombardments and a definite lack of the plumed lead-soldier pageantry that marked the Napoleonic wars. We have vivid descriptions of it, thanks to the patriotic zeal of a man sometimes called the first war correspondent, Lt. Leo Tolstoy, who, aghast at the death of a friend, “one of the few honest and intelligent generals in the Russian Army,” decided to pause from novel writing and card playing to request transfer to Sebastopol, then under siege.
While the Russians have mastered exerting brute force upon their own and their immediate neighbors, when they venture out into the greater world, they encounter their betters and learn the same lesson, again and again, one Tolstoy quickly figured out too.
“I spent a couple hours chatting with French and English wounded,” he noted in his diary on Nov. 23, 1854. “Every soldier is proud of his position and respects himself; good weapons and the skills to use them . . . with us, stupid drills, useless weapons, oppression, age, lack of education and bad food destroy the men’s last spark of pride, and give them a too high opinion of the enemy.”
If through some unimaginable chain of blunders, America were drawn into this conflict, no doubt it would eventually bring another sobering reappraisal for the Russians. Not that it makes it worth doing. Putin’s outrage upon Ukraine, while bad for them now, will ultimately benefit the world, revealing Putin as the beast he always has been. In 1856, the Russians, an army equipped with muskets fighting a Europe armed with rifles, lost the Crimean War. While they can win a first act, their serfdom-turned-dictatorship has no legs, and patience on our part is better than the blind lunge to action that Obama’s rabid enemies seem to prefer.
Tolstoy, by the way, when he wasn’t gambling away his family estate at cards, made his name in the Crimean War, publishing his “Sebastopol Sketches” that established him as a literary force. The book contains a scene worth recalling. He enters a field hospital filled with wounded, where he finds 40 or 50 amputees, some on beds, most on the floor. Not wanting to just walk up and gape, Tolstoy tries to find a face less agonized than the rest and starts conversation with an old sailor whose leg was lost to a shell.
Are you in pain? Tolstoy asks.
“The main thing, your honor, is not to spend too much time thinking about it,” the sailor tells Tolstoy. “If you don’t think about it, it doesn’t seem much. Most of man’s troubles come from thinking too much.”
The italics are Tolstoy’s, suggesting he doubts this logic. As should we. Some in the U.S. are so hot to damn the president they’ll urge us to react without thought or preparation. They’re wrong. When it comes to the prospect of war, it’s easy in, hard out. Better to think too much than think too little.