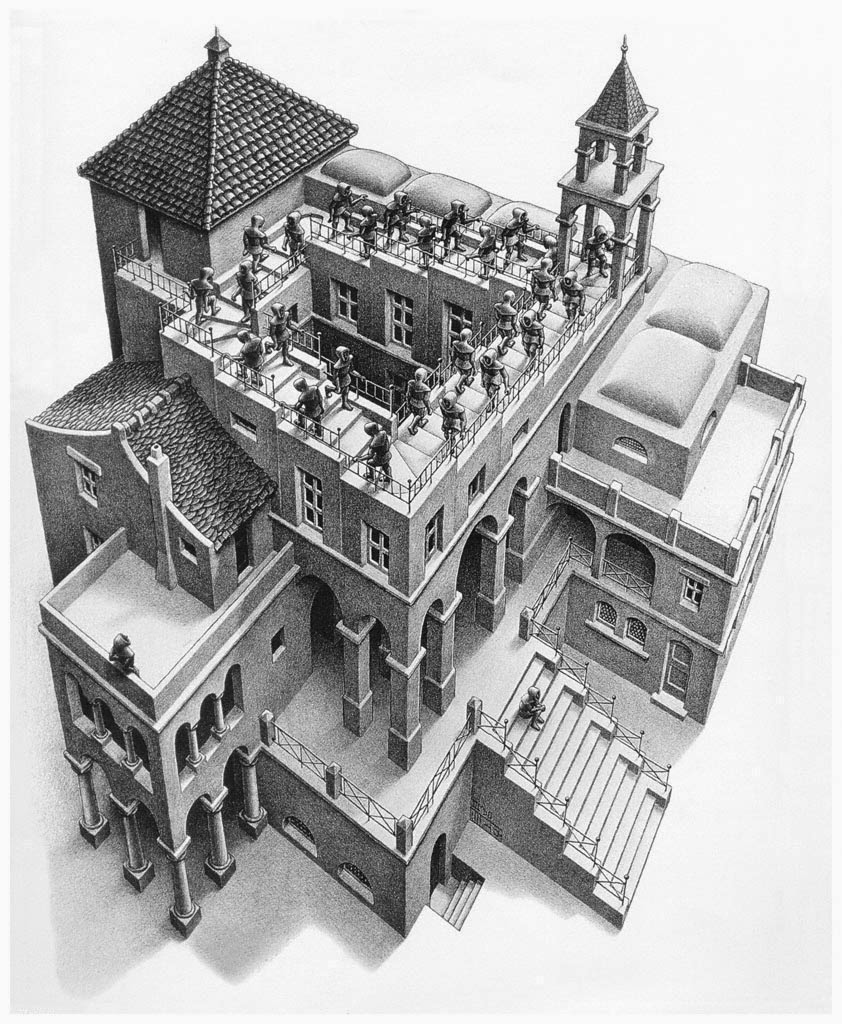 Daily journalism used to be dying. Now it's more of a chronic condition, like diabetes, that responds to treatment and allows for a full life with certain limitations. The metaphor I use is that newspapering is like the M.C. Escher staircase that keeps going down and down but somehow never reaches the bottom. It was a really good job for a really long time and, for me at least, still is. That's enough; more, that's plenty. As for the future, well, it isn't certain but—bulletin—nobody's is. Just some people are more confident than others.

Thus it's okay to indulge in nostalgia and self-congratulation, occasionally, such as today, when I mark my 27th anniversary on the staff at the paper. Sometimes that seems like a failure of imagination or courage. But I think in general it is a good thing, something to recognize. On Monday morning, March 23, 1987, the 26-year-old version of me put on his coat and tie, took the L in from his apartment in Oak Park, then read every plaque between the State and Lake L stop and the Sun-Times Building at 401 N. Wabash, killing time, because I was so early. I reported to Kevin Hellyer, who gave me an assignment: write a 15-line story about a dog show. And away we went.
Looking back over 27 years at the paper, the best part was being sent places I would never otherwise be, and finding things there that were unexpected. I'm not sure if this is my "favorite" story, but it's the one I'm most proud of, in some ways, because what I was sent to do—cover the opening ceremony of a new pool—was very different from what I ended up focusing on. Most things I write have no effect whatsoever—that's an article of faith with me. But this one did: an embarrassed Park District invited the kids back, and gave them an ice cream and pool party. I was happy about that.

Within sight of the city's showplace swimming pool, shimmering a cool and tantalizing blue, about 200 city children sweltered uncomfortably for three hours in the midday sun Thursday, waiting for permission to go in.
It never came.
Instead, they were a captive audience for a Chicago Park District ceremony to celebrate the $4 million rehab of the pool, now christened the Washington Park Aquatic Center, at 5530 S. Russell.
It wasn't supposed to work that way. The kids, from the Washington Park Day Camp, were told when they arrived at 10 a.m. that they would get to swim for an hour before the noon ceremony.
"We think they did a great job with this pool," said Tamika Tate, 11, wearing her bathing cap and suit, towel at the ready, at 11:30 a.m. "I wouldn't miss one single day."
But Tamika and the other kids were instead put to work blowing up the white, blue and aqua balloons that dotted the eight-lane, 50-meter  pool, used for Olympic trials in 1936.   The pool's new shallow area grades up to a "zero depth" concrete beach and is decorated with 11 beautiful and inviting fountains.
"They're frustrated because they can't get in the pool," said Debra McKenzie, the playground supervisor for the Washington Park Day Camp. The kids were then told they could swim for a while after the ceremony.
Nearby, a new 36-foot, double-loop water slide - the only one in the city - stood next to a diving pool that was supposed to have three diving boards but doesn't, because the bottom is too shallow to meet state code requirements.
"I don't know what happened," said park Commissioner Joe Phelps. "The Park District is investigating."
The ceremony kicked off at noon with an opening address, an invocation blessing the pool, the singing of the national anthem, then the introduction of the master of ceremonies and the many special guests, who included outgoing Supt. Robert C. Penn Park District President John W. Rogers Jr. and Ald. Arenda Troutman (20th).
All had things to say.
"I would clearly be remiss if I did not acknowledge and publicly thank an individual I worked with very, very closely over the years," said Penn, who proceeded to to do so, as balloons periodically exploded in the sun. He said this was his last public appearance "unless we can come up with some event we can dedicate tomorrow."
"I'm bored, sitting right here," said Nakita Clayborne, 9.
"We're supposed to go swimming today," said Sequita Stuart, 10.
"It's hot out here; I want to get in the pool," said Seneca Scott, 11.
". . . I would be remiss if I didn't mention another person . . ." said Penn, who did so.
After the speeches, entertainment. A water ballet. And a dance by the Washington Park Steppers.  And the formal handing over of a gold life preserver from one Park District official to another, who could not be accused of performing for the television cameras, since there were none.
By the end, after 1 p.m., the water slide was inaugurated by several high Park District officials, including Commissioner Margaret Burroughs, who vowed to bring the slides to parks around the city.
"It's great, great! Oh boy, I love it!" she laughed, dripping and wet, after taking the plunge.
By that time, the 200 children were filing out of the pool area. It was time for lunch.
"Maybe tomorrow," said McKenzie, leading the kids away.