Not an "issue," a "traffic snarl from hell" 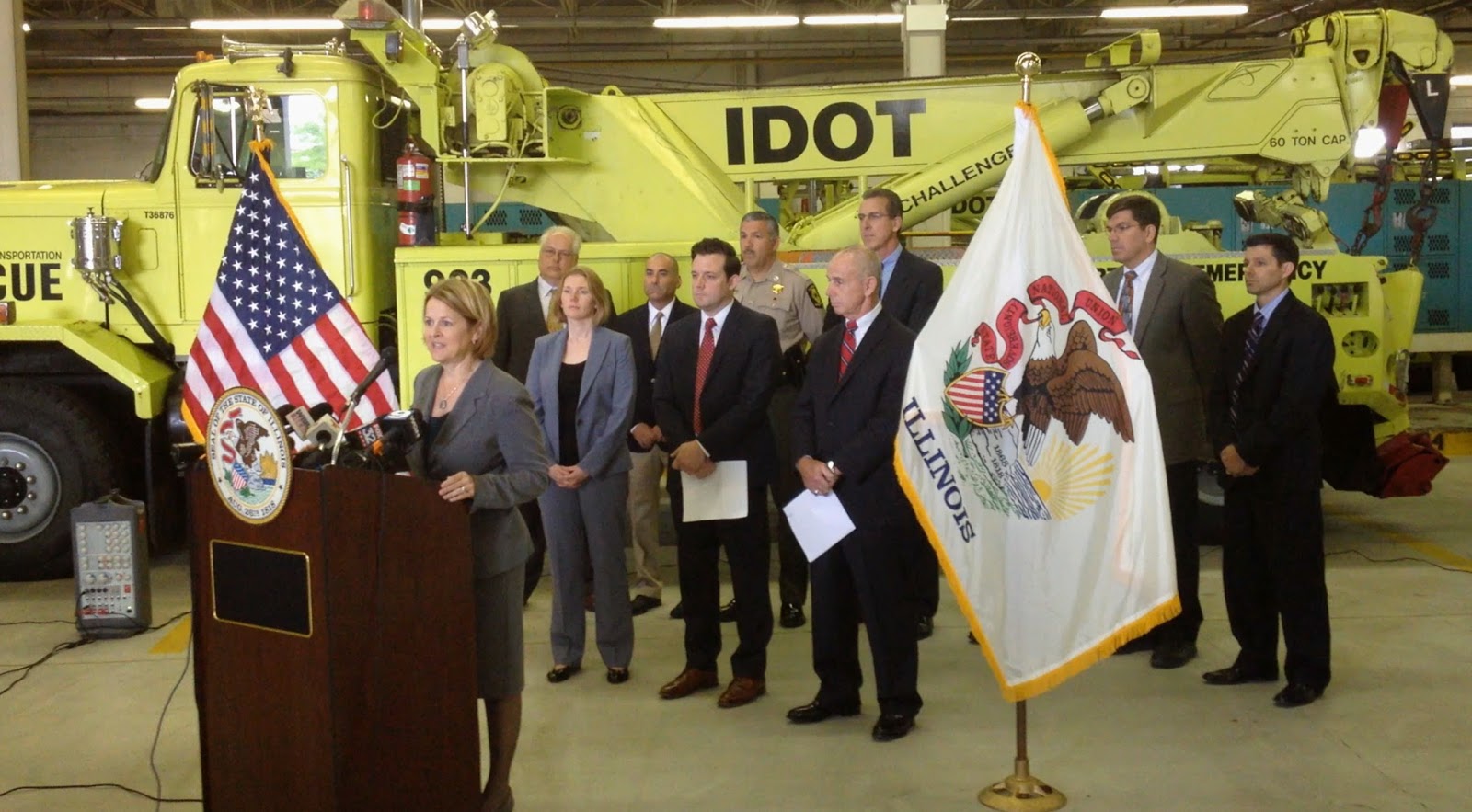 In the name of all that is holy, STAY OFF THE KENNEDY EXPRESSWAY for the next three weekends! That is, unless you want to be plunged into a TRAFFIC JAM NIGHTMARE HORROR beyond your worst imaginings!!!
Not that state officials will put it that way.
“The city of Chicago is still open for business,” enthused Ann Schneider, secretary of the Illinois Department of Transportation, at a press conference at IDOT’s emergency center at 35th and Normal on Tuesday. “People should, when they make their travel plans for these weekends, make sure they do so understanding there’s going to be some traffic issues. For sure, definitely understand that the city is open for business.”
Translation: Part of the monolithic Ontario Street bridge, built in 1959, over the Kennedy Expressway is being demolished. Beginning at 10 p.m. Friday the clotted-on-a-good-day five lanes of the Kennedy will go down to a sclerotic two lanes, with speed limits of 10 to 15 mph, in theory, exiting at Ohio, executing a hairpin turn, and returning to the highway, eventually. While the $16.5 million project is underway, chamber of commerce types want you to fight your way into the city to stores. If you must, DON’T FOR ANY REASON DRIVE DOWNTOWN DURING THE WEEKENDS OF JUNE 13, 20 AND 27!!!!!
In a strange marriage of traffic warning and tourist board puffery, state officials listed the two dozen special events taking place in the midst of this construction, from the Chicago Blues Fest, the Gay Pride Parade and the Gospel Music Festival.
The bridge is a relic of 1950s gigantism, making it even harder to remove.
“It was poured in one piece and, because of that, it has to be removed as one unit,” said Sarah Wilson, a bridge maintenance engineer at IDOT. She said that because of deterioration of the bridge, traffic has been restricted to the legal load limit of 40 tons four years ago — as opposed to allowing heavier loads by permit — and if the bridge wasn’t replaced, they’d eventually have to ban trucks from the Kennedy. “This is a safety issue in terms of getting this very old structure demolished and out of the way.”
“Issue” was definitely the term of the day, along with “challenge.” But it is an indication of just what a SNARLED CREEPING ORDEAL OF MISERABLE MOTIONLESSNESS anyone entering the Kennedy during that time will face during that the dreaded p-word — “problem” was almost uttered.
"That is a pro . . ." Schneider began when a reporter asked what would become of their schedule if it rains in June (average rainfall in Chicago in June: 3.45 inches, more than in April or November), before catching herself.
"That is a challenge for us," she said. "There is the potential that the weather could delay some of this."
Another issue will be the 260,000 cars that daily use the Kennedy pouring onto side streets, and state officials warn bicyclists to TAKE EXTRA CARE THAT THEY ARE NOT KILLED by frustrated drivers, though of course not in those words either.
"Bicyclists are also urged to be aware that there will be additional traffic on arterial streets, and like motorists, are encouraged to plan accordingly," IDOT suggested in a press release.
(Seasoned commuters know there's a slim chance that so many will be scared off the Kennedy that, at times, those few brave souls who hazard traveling it will find driving a breeze, at least until everyone else realizes the other guy is avoiding it, flooding back, jamming the thing totally).
"Make no mistake, the city is open for business," echoed Gary Schenkel, executive director of the Office of Emergency Management and Communication. "There is no place like Chicago in the summer, after the long winter . . . " (It must be Rahm's tireless civic ballyhoo; it infects people) " . . . so whether you are planning to attend our festivals, special events, beaches, ballgames, shopping dining downtown or in our neighborhoods, we are asking motorists to plan accordingly and to cooperate with IDOT's request to use alternate routes and public transportation over the next three weekends . . . there are increased public transportation options for those who want to take advantage of all this world-class city has to offer."
Translation: Take the train, if you can find a place to stand. Otherwise, have you considered visiting beautiful Milwaukee? Our neighbor to the north has a fine art museum and lovely lakefront. Just 90 minutes away, assuming YOU DON'T FOOLISHLY TRY TO TAKE THE KENNEDY THROUGH DOWNTOWN TO GET THERE!!!