We're all meowing for the Blackhawks now 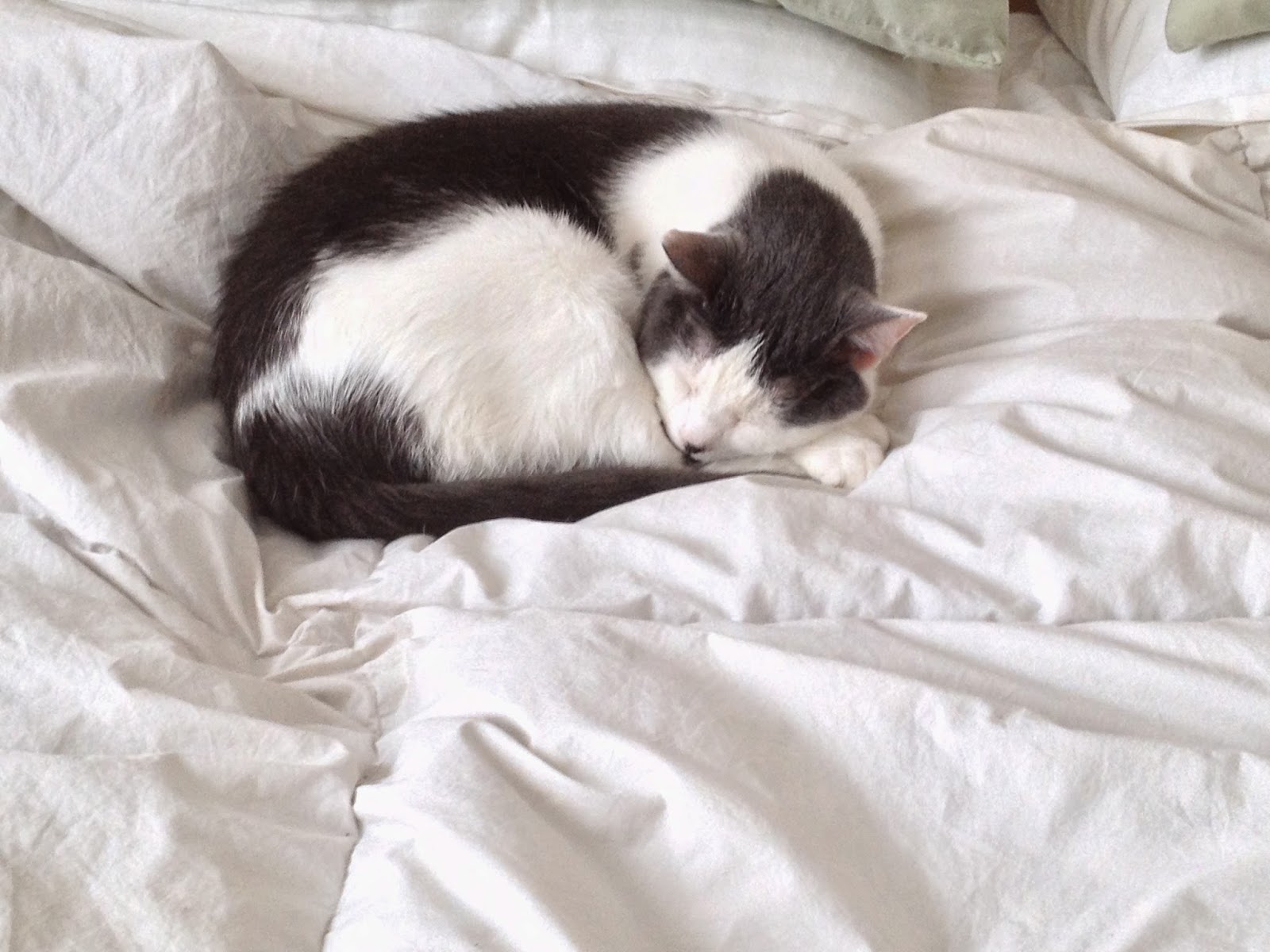 Why are Johnny-come-lately fans frowned upon? Because they haven't paid their dues? You're watching a game; how much experience do you really need? You'd think fans, proud of their sport, would welcome anybody who wants to give it a try, for whatever reason.
As a long time-opera goer, if some hot production—"barn-burners" as Sir Andrew calls them—suddenly drew mobs of neophytes,  I can't see curling my lip at them and sneering, "Oh, yeah? Well where were you back in '98 when we were suffering through Wozzeck?" As long as you don't talk during the performance or bolt for the exits at the end without clapping, the more the merrier.
And yet. In sports, those who drift late into the action, prompted by success, are often derided. I suppose because it is a human joy to view other humans with scorn, and shifting values being what they are, it can be a challenge to find someone to unashamedly hold in contempt. Fair weather fans have no anti-defamation league.
No matter. The boys and I watched the Blackhawks game Friday--Ross, of all people, who once referred to a glove as a "baseball mitten," started tuning in. And I joined him for the third, ah, not quarter, umm ... period. I don't like watching hockey as much as basketball. The puck's too small and moves too fast, and all the players look the same.
But with so much on the line, it was still exciting. We cheered. We shouted. Watching the game, I even started to detect patterns, a flow to the action. And an admiration for the Blackhawks, as individuals, started to build. Tough guys, obviously, being smashed into the boards all the time like that. No quit in them. We should be proud, and we are, and if people such as myself and my lads check in the action, shoehorn ourselves into that "we," well, roll with it. I had the Stanley Cup on my desk at work. That should count for something. It doesn't take away from those who have been hanging on every second all season long. If you can explain how the experience is diminished for you by our watching too, now, I'm all ears.
Although not a fan, I suppose I can't quite call myself a Johnny-come-lately either, in that I saw my first Blackhawks game in the old Chicago Stadium more than 20 years ago, against the Los Angeles Kings, coincidentally. Of course, it was under unusual circumstances. I did not actually go to watch the game. I went to meet a ... well, maybe I better just share the story, perhaps it'll bring good luck—the Blackhawks thumped the Kings, 7-2, the night I was there, despite the presence of the supposed "Great One," Wayne Gretsky. Maybe they'll do it again tonight. Go Hawks!

You can be a Blackhawks season ticket-holder and never see her. You can sit at center court for every Bulls game and not know her name. Yet she is there.
Some fans have reported sightings: a flash of a whisker; a glimpse of a paw. Something mysterious in the upper balcony, gliding behind the stands.
Could it . . . possibly be . . . a cat?
Yes, it is, or more precisely, she is, the Chicago Stadium cat, named, somewhat generically, "Cat."
"She got in here seven years ago when she was a kitten and has been here ever since," said Dan Ahearn, of the stadium operations crew. "She likes staying in my office during the day, but at night, she goes on the hunt."
Like any cat, Cat pays careful attention to her comfort. During games, when multitudes of loud strangers invade her home, she takes up a strategic position on an old flannel shirt on a swivel chair in Ahearn's tiny office. A television in the office is always turned to the game and, sometimes, she watches.
After games, Cat takes control, ranging over the entire stadium, from the upper balconies to the hockey ice, sometimes following Ahearn as he drives the Zamboni, or lending a critical eye to the stadium crew.
"She was sitting at center line when we were putting the red line down, as if inspecting it, to make sure it's straight," said Ahearn who, in return for feeding her twice a day and seeing to her other various needs, is granted a measure of Cat's company.
"At eight in the morning, if she's not around, I'll whistle, or rattle my keys. In five minutes, she's there," Ahearn said. "She'll follow me down the hall, or even out onto the ice."
For reasons unclear, Cat seems to follow the Blackhawks but has no interest in the Bulls, Ahearn said. Basketball just doesn't fluff her fur, though she once joined the team on the court for a practice.
Like many fans, Cat once tried to claim one of her heroes as her own.
"When she first came in, she used to hang out down by the Blackhawks dressing room," Ahearn said. "She did a little marking on Darren Pang's goalie pad."
Cat is not the only feline to share quarters with the NHL. Down in St. Louis, the Arena has not one, but two cats, Damian and Scarch.
"They are boys, brothers," said Kathleen Heinz, director of marketing for the St. Louis Blues. "We needed some animals to control the birds. They fly in and then there's no way for them to get back out. It's helpful to have the cats handle the situation."
Unlike Cat, the St. Louis brothers love the crowds.
"They're so friendly, always winding up in somebody's lap," Heinz said. "You'll hear on radio, 'Cat in section 105.' "
The St. Louis cats have gained a certain amount of fame because of their affectionate nature, which they are savvy enough to direct toward the media.
"For some reason, they take a real shine to reporters, they hang out on press row," Heinz said. "Damian would always sit in the lap of a reporter with our local NBC affiliate. He did a story on Damian; ESPN picked it up, and it played all over the world."
While Damian and Scarch stay off the ice, they do get a kick out of the indoor soccer field.
"When the field is down, the cats go out, running the goals, back and forth, playing their own little game of soccer," Heinz said. "They ride the elevator."
There isn't a bird problem at the Stadium, but Cat does earn her keep. Two summers ago she scared away a big dog, and last year she reduced the arena rodent population by one.
"She killed a rat last summer, out in the parking lot," Ahearn said. "The rat was as big as she was."
In Minnesota, the Met Center doesn't admit to rats, but mice are an acknowledged problem, despite the efforts of a cat named Smokey, who has a reputation as a swift mouser. She also startles fans.
"She's pretty playful," said Jami Busby, a spokesperson for the North Stars. "She'll jump out at you; she has scared quite a few people."
A stray, taken in six years ago, Smokey does not prowl, but is escorted to her prey by the ever-accommodating Met Center staff.
"Whenever we have mice, we always take her to where the mice are," Busby said.
Back at the Stadium, during a recent game, Cat was in her customary place, in the cluttered operations office, nestled comfortably on the flannel shirt.
On television, a zombified Wayne Gretzky skated aimlessly around the ice, seemingly lost in private thought, while his Los Angeles Kings suffered a 7-2 drubbing to the Blackhawks.
But Cat, true to her race, spent most of the game with her eyes shut. Curled up, she looked very content, sleeping her feline sleep with an inner calm. So good to be home at the Stadium.
—Originally published in the Sun-Times, March 7, 1993,