What is it like to step on a landmine? 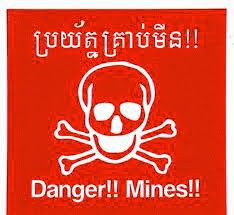 Rahmatullah Merzayee was 11 years old, almost 12, when, walking home from school in Kabul, Afghanistan, one afternoon, he stepped on a land mine.
“After the explosion, I looked up and saw ... I don’t know the exact words,” he said. “I saw a dark environment, a windy dark, like a breeze, all around me. When I touch my legs I felt nothing. I can’t explain in words.”
Merzayee, now 28, spoke to me over the phone from Mozambique, where he is attending an international conference on land mines, officially a mouthful: The Third Review Conference of the Convention on the Prohibition of the Use, Stockpiling, Production and Transfer of Anti-Personnel Mines and on Their Destruction, running through Friday in Maputo, the nation’s capital.
The conference drew more than 1,000 representatives from nations around the world, and the news, surprisingly, is good for once: since the signing of a global mine ban treaty in the late 1990s, production of mines has almost stopped, casualties have plummeted, and countries such as Mozambique that are riddled with land mines from past conflicts have made great strides in removing them, according to the International Committee to Ban Landmines, which won the Nobel Peace Prize in 1997 for its work.
One less cheerful point is that the United States, while pouring money into combating the harm caused by land mines, is still not among the 161 nations that signed the ban.
“The U.S. has two diplomats here, but we have nothing to report,” said Chris Walljasper, a Medill student who picked up his graduate degree on Saturday and got on a plane Sunday for Mozambique, where he’s preparing for the fall, when Northwestern’s National Security Reporting Fellowship program focuses on the issue of anti-personnel mines.
The old argument is that the U.S. needs land mines to stave off the North Koreans. But in a world of fast deployment forces, that's not a convincing reason, and military experts have claimed that mines constrict defense more than help. Their scant value must be weighed against the fact that mines are active for decades and deliver horrific injuries to civilians - half of victims are children — far more than they harm combatants. "People put them there and then leave them behind," said Dr. Jeffrey Ackman, chief of staff at Shriners Hospitals for Children Chicago, which sees many land-mine victims. "They cause a tremendous amount of damage, devastating injuries, more so in peacetime than in wartime because nobody suspects them."
In addition to physical damage, Ackman said mines often cause great psychological harm, as villages in developing nations tend to have little access to prosthetics or rehabilitation services, and the loss of a limb often consigns victims to lives of beggary.
After Merzayee stepped on a mine, a taxi driver rushed him to a hospital, which saved his life but amputated his legs at the knee, the first of seven surgeries. He was in the hospital for five months, and though he received top-notch follow-up - a charitable group flew him to Germany to be fitted for prosthetic legs - it was still hard to bear.
"I felt isolated; I became unable to do anything in my life," said Merzayee, who walks with two canes. "I will be a burden for myself and my family. I felt really disappointed, felt that I am alive just breathing, not really living, not like an active person. There is nothing I can do for myself, for my family, my community. This land mine changed my life completely, I cannot do anything for my life. That was my feeling."
But he made progress. "After a year I could stand on my legs and come back to Afghanistan and started school." Since 2008, he has worked for Afghan Landmine Survivors. "This organization is involved in advocacy and awareness," he said, hoping that mines will become beyond the pale of warfare, like poison gas.
"The United States is a country that is a big donor for other issues around the world," Merzayee said. "[The U.S.] signing would mean we will have a world completely free of land mines, and it will encourage other nonsigners, like Russia and China, to join this treaty. If the United States joined, it will mean the world will be free of land-mine production. No stockpiles, no land-mine victims. We hope that the United States can take the lead and others will follow."
It's a little late for the U.S. to take the lead, except in the sense of being ahead of Russia and China. One hundred and sixty one nations have traded use of a crude, almost antique weapon that mostly maims children for the moral high ground and signed the land-mine ban. We can too.
Posted by Neil Steinberg at 12:00 AM