"I wondered what I wanted out of this trip"

Father's Day.
Like many men my age, I am sandwiched between two generations. Prompted by the holiday, I can either look to my own children, or to my dad, 81 and living in Boulder, Colorado.
I'm thinking more of my father lately--I just saw the old commander a few weeks back, when my oldest boy graduated from high school.
Then in a bookstore Saturday, I came upon a copy of Bowditch's "The American Practical Navigator," a thick nautical reference. "I read this on the ship," I told my wife, and suddenly I was sailing the Empire State.
You might not know it, but I wrote a book about my dad.  No reason that you would: the thing sold 2,000 copies, maybe. Sank like a stone. I don't talk about it much. Frankly, I don't think about it much. It was 15 years ago that we crossed the Atlantic together on his old ship, the Empire State, run by the State University of New York Maritime College, used to train cadets.
In 2002, my book about it came out, "Don't Give Up the Ship." I had high hopes for the book--unlike all these feel-good dad and lad adventures, this was a challenging tale without the classic epiphanies or happy ending. I thought people would relate to its very human messiness.
Instead we annoyed people. "I found these two men highly irritating" said the critic for UPI, which nevertheless had picked it as "Book of the Week."
Yeah, well, hard to argue that one. But you have to be who you are, and you have to dance with who brung ya.  I thought, in honor of the holiday, I would drag out this excerpt, which ran in the Sun-Times. Happy Father's Day, if possible.

The big morning finally arrived. My father and I did our sweeping checks of the room, the "V.I.P. Suite" at the State University of New York's Maritime College in the Bronx. Thin industrial carpeting over a concrete floor, nautical prints, spartan, sturdy furniture; a state college's idea of luxury. We peered under beds, searched every drawer and closet, even those we had never used, not wanting to leave anything behind, trying to be smart and thorough.
We wheeled our suitcases into the bright 7 a.m. mid-May sunshine and across the Maritime campus. Mostly 1950s brick buildings, square and charmless, in the shadow of the Throg's Neck Bridge, but also Fort Schuyler, an 1830s pentagonal stone structure built to defend the Hell Gate against the British, with thick walls and gun slits and a parade ground. We walked toward the Empire State--our ship, for the next month, sailing down the coast to the Caribbean and then across the Atlantic to Italy-- gleaming white at the pier. 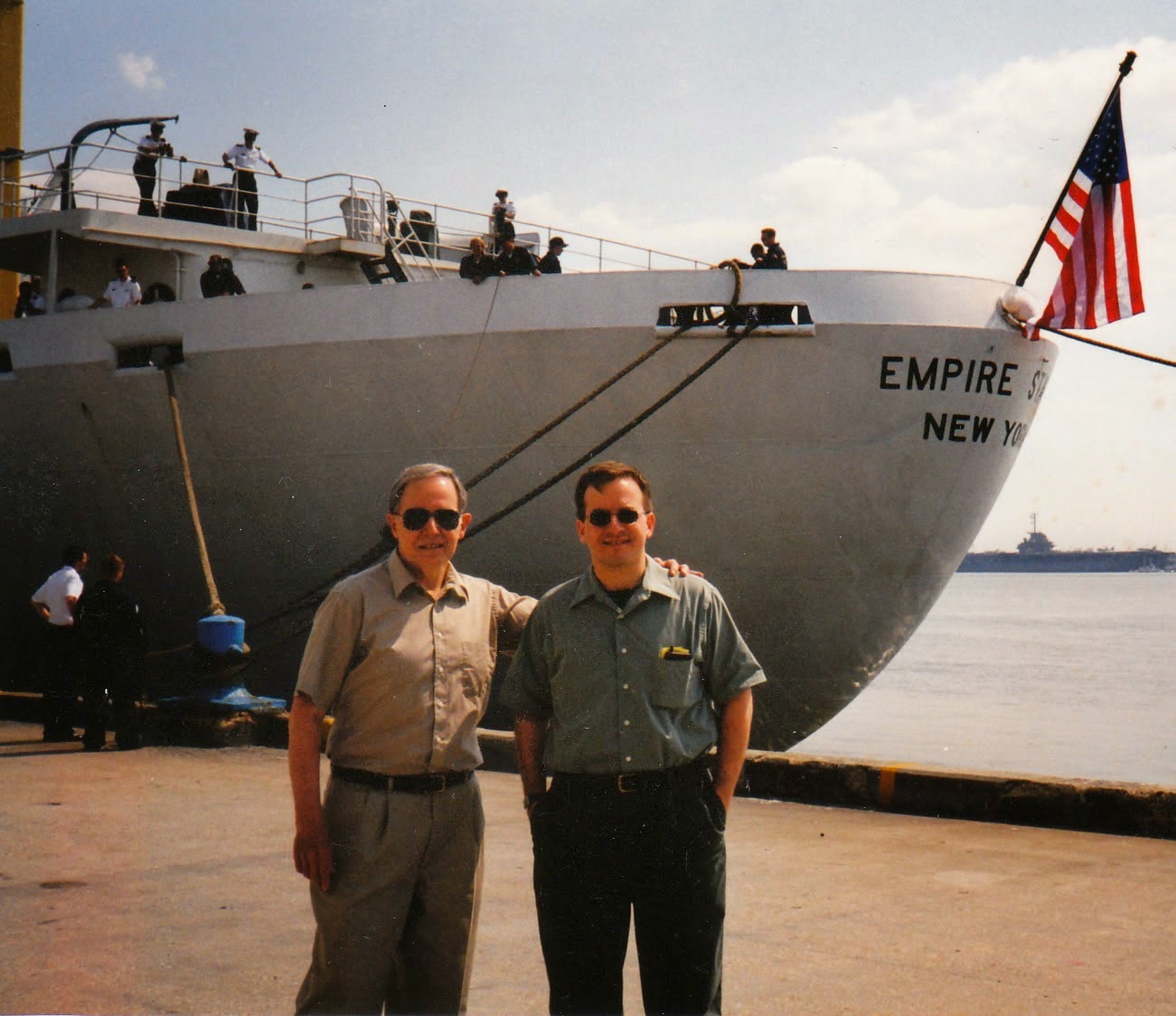 The pier was hectic with a festive, pre-summer-camp sort of commotion, busy with families, girlfriends, boyfriends and cadets--trim teens in bright white shirts and dark navy pants, their "salt and pepper'' uniforms. They towered over their parents. Mothers held bunches of balloons. Fathers lugged big portable coolers, cases of soda, cases of juice. I worried that we were unprepared--we had no juice--and puzzled over the balloons. At least a dozen families had brought bunches of them. They seemed an odd, child's-birthday-party touch.
My father stopped short and I ran thud into him. Like a vaudeville act. Disentangling ourselves and our rolling luggage, I wondered, "Is this how it's going to be? Frick and Frack?" I looked around to see if anybody noticed.
Turning onto Dock 19, where the ship was tied up, I saw that the dock was named for A.F. Olivet, the no-nonsense captain during my father's cruises. I paused to make note of that, and of the dinghies moored under a protective wooden roof leading to the ship--they had bold, forward-straining names: Courageous, Freedom, America, Magic.
Looking up, I saw that my father, the good New Yorker, had kept walking. I called to him--"Dad! Wait!"--and he turned. "I'll go slow," he shouted back. But he didn't go slow. He strode toward the ship. I hurried after him, the luggage wheels humming against the concrete.
I got alongside the ship, almost to the gangway, just in time to see him go up without me, lugging his suitcase, a wide smile spread across his face. He said something pleasant to the officer at the top of the gangway and disappeared inside the Empire State. I stood on the pier a moment, shocked, then raced after him, hefting my suitcase in both hands and clattering up the awkward low metal steps. After months of arranging--the conversations, the phone calls, the formal letters, the visits--I had figured that our boarding the ship would be an obvious moment of high drama: an exchange of loving glances, a pat on the back, a shy filial smile, a fatherly ruffle of the hair, a deep breath and up we go together, arms linked. Ta-daaaaaaaah!
Not in this life.
"What's your hurry, sailor?" I hissed, out of breath, catching up to him at the cabin, C1, marked by a note card reading "Mr. Stienburg Sr." and "Mr. Stienburg Jr."
He offered this explanation: he wanted to get his suitcase aboard before the tide came in, raising the angle of the gangway, making it more difficult to walk up. He actually said this. Stunned, I turned away, puzzling whether his excuse was a mountainous lie or, worse, a sincere delusion.
I stood in the bathroom and looked at myself in the mirror: how was I going to do this? Six weeks with my father. A month at sea, then 10 days in Italy. We'd kill each other. Or I'd kill him. Or myself. Or he'd kill me. One way or another, somebody was going to be killed. 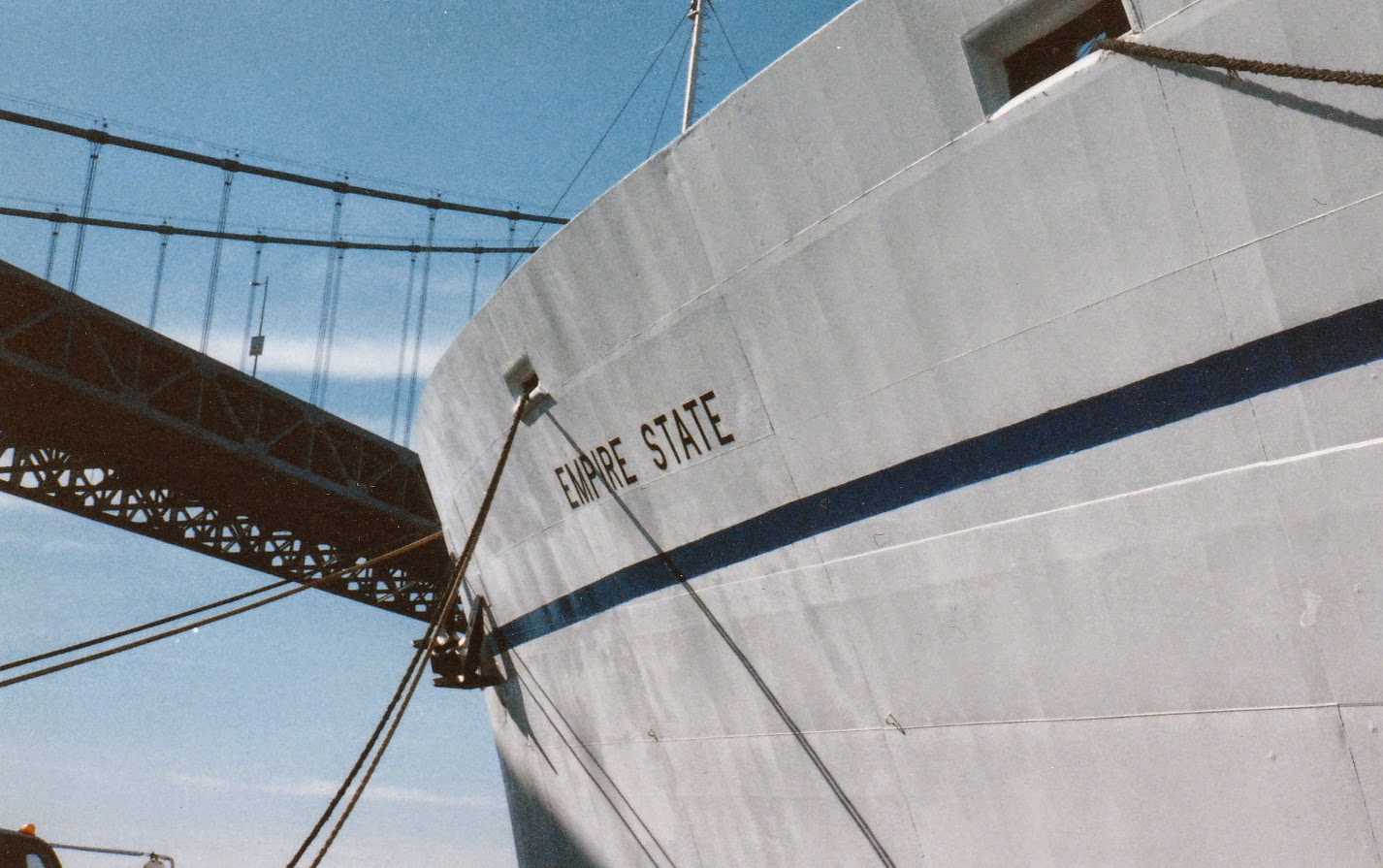 Then the anger, a hot fluid at the back of my brain, drained away and I almost laughed--the tide; so ridiculous--and I remembered that, up to this moment, I had been genuinely worried my father wouldn't get on the ship at all. That despite his promises, when the moment finally came, he would freeze up on the gangway. Many times I had imagined, not entirely without pleasure, him grasping the handrails, white knuckled, rigid, me behind him, ramming the heel of my hand into the small of his back, forcing him forward. "Get on the goddamn ship, dad!"
That had been the preconception. The reality was 180 degrees opposite. Instead of hanging back, fearful, needing a shove, he had raced ahead, excited, forgetting all about me. Realizing this shocked away the anger. It struck me that, after all these years, I didn't know my father at all. Not a bit.
We stowed our luggage in the cabin. When we had seen it for the first time, the night before, it had seemed huge. But now it looked very small. Two single beds, bolted to the floor, 19 inches apart. Between them, a single square window, facing forward, offering the vista of the foredeck, nearly the length and breadth of a football field. The window couldn't open.
I set my laptop computer on the desk. The newspaper had refused to grant me the leave I requested. Instead, they insisted I file my column from the sea. Not exactly convenient. Still, given how I had botched my request, I was relieved they let me go at all.
Newspaper editors-in-chief are not famous for their bonhomie, and my boss at the time at the Sun-Times, Nigel Wade, was perhaps more aloof than most. A large, ruddy, well-tailored New Zealander with a dramatic head of silvery hair, he was not given to long, friendly exchanges with the staff. Or even short, friendly exchanges.
Granted, it would have been difficult to pick a worse moment to bring up the trip. I had written a column about not having an idea for a column--something I thought was very hip, very Seinfeld, and also happened to be true, always a plus in journalism. I enjoyed puncturing the notion of columnist-as-infallible-font-of-endless-wisdom, and admired the portrait I painted of myself slumped before the computer, mouth open, head empty. "This must be what stupid people feel like all the time," I wrote.
Nigel hated it. "If you can't think of an idea for your coh-lum, then perhaps you should not be writing a coh-lum," he said, after I was summoned to his office for a chewing out. At first I bristled--the column did have an idea behind it: not having an idea for a column. He just didn't like my argument, didn't like the suggestion that some days there is no wisdom to sell for 35 cents. That didn't go over well either. I tried a second approach: I was tired, working very hard, maybe the grind was getting to me, but I certainly still had something left to say. He liked that better. I was off the hook. The flames died down, we entered in that phase of relaxation that comes after a tense talk; the raking of embers, decompressing back into the workday, when I unwisely said something along the lines of: Besides, I've got this ocean voyage with my dad coming up, will need to take off a few months from work, and that should give me a chance to recharge my batteries.
What could I have been expecting? "A nautical adventure? Jolly good! Splendid. Just the medicine for you. Don't know why you waste your time on all this newspaper nonsense anyway. We must lift a few brandies at the 410 Club before you sail."
The actuality was different.
"Fuck off then!' Nigel shouted, leaping up and waving me toward the door. "Fuck off! Get out of here!" I fled, backing out of the office, babbling apologies, hands spread in defensive entreaty, almost bowing. Not the heigh-ho send-off I might have hoped for. 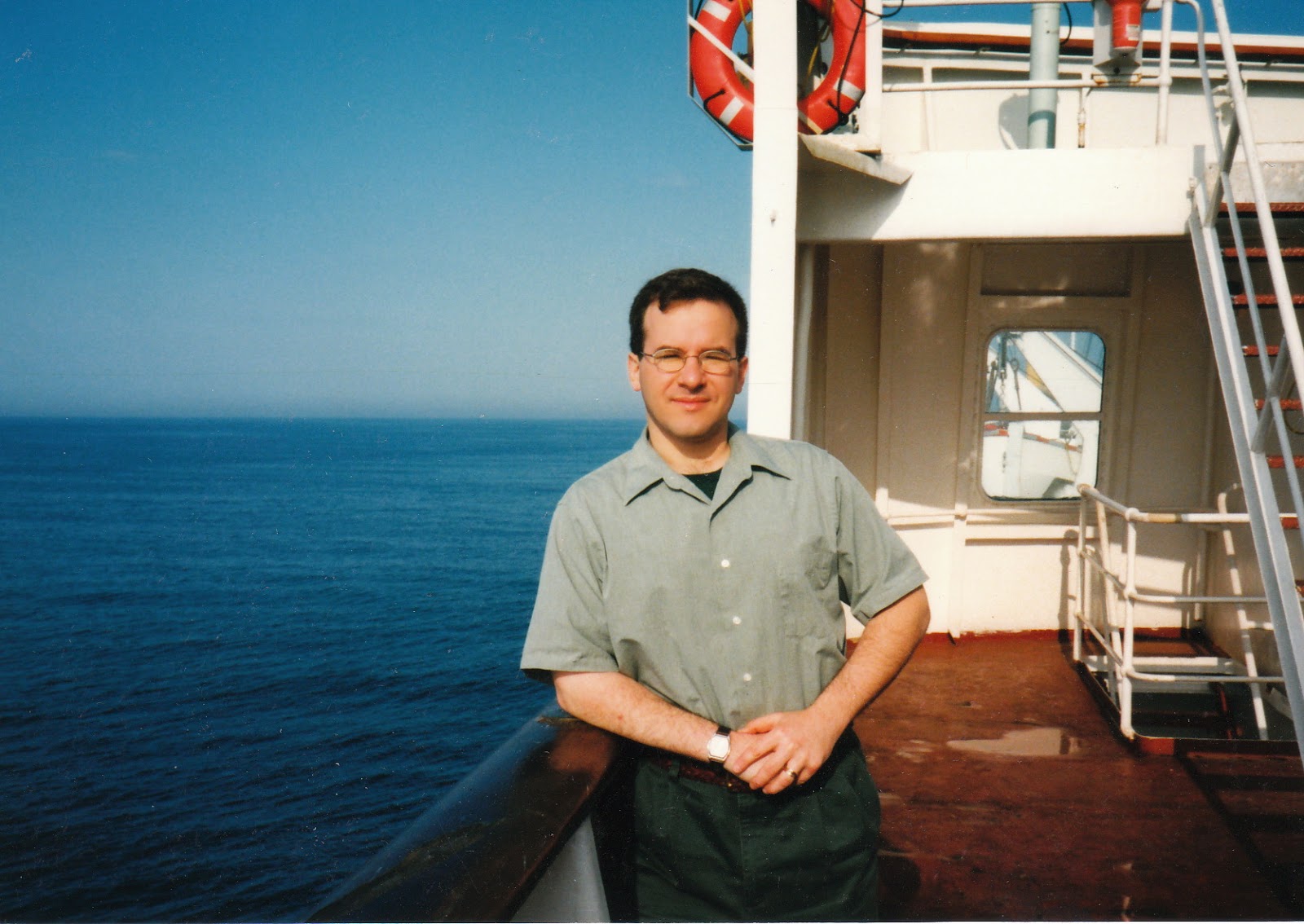 You can buy the book online for a penny, $4 total, delivered, if you include the $3.99 shipping, on Amazon, by clicking here.